The algorithm used to measure influence and content in Symplur

In Symplur, you have the option to rank the data in your dashboard by SymplurRank, Mentions, Impressions, etc. 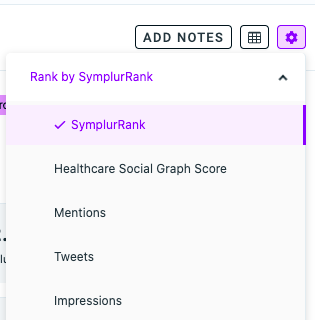 SymplurRank is the underlying algorithm used to measure the influence of people and the importance of content for selected datasets and parameters.

SymplurRank is available in the following widgets:

Let's discuss how SymplurRank works for each widget section by using the Influencers widget as an example below. 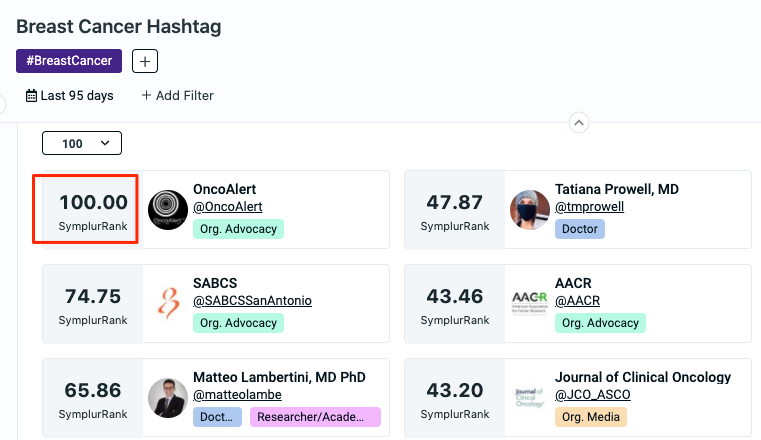 SymplurRank for Influencers is an algorithm developed by Symplur for accurately identifying and ranking true influencers of any healthcare conversation. The algorithm solves the weaknesses found in the simplistic metrics that are too easily manipulated, such as the number of mentions, tweets, followers, etc.

SymplurRank orders influential accounts by measuring the number of quality mentions received. The quality of a mention is determined by the account who gave it and that account's own influence on the topic at hand, its healthcare stakeholder status, and its overall influence in healthcare social media.

This algorithm is designed specifically for healthcare and therefore takes into consideration both an account's influence on a specific health topic and what healthcare stakeholder group any account belongs to.

In other words, it matters what role a person has in healthcare. If, for example, an account is conversing or being mentioned by another account that is not known to be related to healthcare, then that conversation and those mentions will be seen as of little worth by the algorithm.

If, on the other hand, the conversation and mentions are made by a doctor or caregiver influential on the topic at hand, then that is seen as weighing positively by the algorithm. See Healthcare Stakeholder for more information on stakeholders.